Aloha again! The PGA Tour is in its second week of the Hawaii swing as we arrive at the 2022 Sony Open, where a majority of the field will be kicking off the rust to jump-start their 2022 year after an extended layoff. But not to worry, as there are still plenty of wagering opportunities offered by DraftKings, whether you’re exploring one of the many golf betting markets or focusing on Daily Fantasy.

There have been a number of withdrawals since this field was originally announced, highlighted by Bryson DeChambeau, which has shaken up the betting value a bit at the top of the board. With that said, the DFS pricing remains the same and there is no shortage of low-priced, high upside players to choose from at Waialae Country Club.

So let’s get to our 2022 Sony Open longshots and sleepers for your DFS lineups and betting cards. 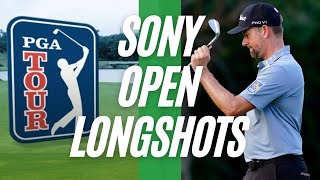 We’ll be using DraftKings DFS pricing and betting odds as the basis of our picks. Unlike last week at Kapalua, the larger field at the Sony Open offers plenty more options at the bottom of the board to get creative with.

Waialae CC has historically neutralized the ball strikers and longer hitters in the field and boiled down to a putting contest that pushes winning scores past 20-under par, and when that’s the case, the specialists at the end of the odds board become much more viable.

It was hard to boil down my favorite value plays to just five this week, but I have a lot of confidence in the upside of the below players as DFS salary savers and longshot outright flyers. Let’s get into it!

Odds & Pricing from Draftkings Sportsbook & DFS are subject to change after writing.

My favorite value on the board in both betting and DFS this week is Keith Mitchell. He’s not your typical accurate plotter off the tee we’re used to seeing contend year over year at Waialae, and yet, he’s contended year over year at Waialae anyway. In four career appearances at the Sony Open, Mitchell has three finishes inside the top 25, highlighted by a T14 here last year. His finish outside the top 25 was a MC in 2020, when he caught the wrong end of severe weather splits and was effectively dead on arrival; I’m not holding a 2020 MC against anyone who’s in the field this week.

Mitchell closed his 2021 season making four consecutive cuts, capped off with a solid T12 finish at the RSM Classic, one of the better comp courses on TOUR to Waialae. Just four starts ago, Mitchell was absolutely dominant at the CJ Cup for two rounds and was minus-odds to win the tournament outright before fading back down to reality over the weekend. Even still, he finished T3 behind McIlroy and Morikawa and proved his ceiling is still as high as anyone else’s in this field.

Killa Keith is a popper with the putter, and was hit or miss all of 2021. He’s gained strokes putting in eight of his last 17 events, and in all eight positive occurrences, he gained at least 2.5 strokes putting. If this becomes a putting contest as it often has, I love this price for one of the streakiest putters in the field on his best surface in Bermuda.

The case for Tom Hoge this week is an obvious one, and I expect him to climb up the Draft Kings ownership projections as the week goes on. But the 90-1 outright odds are still there, and that’s definitely worth jumping on in a field that continues to get weaker and weaker by the hour.

Over the last 24 rounds, Tom Hoge is #1 in this field in SG: APP. That’s not from a couple of fluke pop weeks either, he’s gained 3+ strokes on approach in six consecutive events now, dating back to the Fortinet Championship at the top of the 2022 season. A volatile putter has kept him from contending more frequently, but he closed the 2021 year out hot with six consecutive made cuts, highlighted by a T4 finish in his last event at the RSM Classic.

Hoge is no stranger to the Sony Open either, with a T3 and T12 finish here within the last four years. With the putter showing some signs of life in recent weeks, Hoge stacks up to be a great value for outrights, FRL, and DFS.

There’s never a dull moment when it comes to keeping up with Rory Sabbatini. Last time we saw the Olympic Silver medalist, he carded a solid -4 Thursday round at the RSM Classic before being disqualified for failing to remove a sticker used for launch monitor practice from one of his clubs. Lesson learned, we can only hope he’s used the last two months to get more acclimated with the PGA TOUR rule book.

Before the RSM disqualification, Sabbatini’s game was just starting to click with two Top-10 finishes (T10 at the Wyndham, T3 at the Shriners) in his last four starts. The strengths of his game are in Driving Accuracy (Top 40) and Short Game (4th in Scrambling, 10th in SG: ARG). The putter is also trending in the right direction, gaining in each of his last four measured events. All positive signs for what Waialae CC demands.

I can’t say for certain if Sabbatini loves playing here, but I do know he loves coming here. He has 66 career rounds under his belt at Waialae CC and will be making his 19th appearance at this event this week, second only to Charles Howell III. Over that span of time, he’s finished Runner Up twice and missed only three cuts. At this price, Sabbatini should be able to lean on his experience and trending form to make it through to the weekend.

Keita Nakajima is everything you want to see in an absolute longshot bomb. He’s a relatively unknown 21-year-old prodigy with untapped potential. He is the #1 ranked amateur golfer in the world and is coming in fresh off of winning the Asia-Pacific Amateur Championship in November, which has secured himself an invite to this upcoming Masters. Always an encouraging sign when an amateur with lofty expectations can embrace that pressure and back it up with a win.

Despite the amateur status, Nakajima has gotten plenty of experience on the Japan Tour this year, and picked up another win there at the Panasonic Open in September. While not quite the same strength of field we’ll see this week, Nakajima overcame a solid Japan Tour field that week including OWGR Top-100 players like Shaun Norris and Rikuya Hoshino.

The only time we’ve seen Nakajima play in a field with PGA TOUR players was at the ZOZO Championship this past fall, where he finished a very respectable T28, tied with the likes of Xander Schauffele and Joaquin Niemann. So by the transitive property, Nakajima is as good as Xander Schauffele and Joaquin Niemann. And he’s 200-1 in an average field. Just bet it!

Kramer Hickok’s greatest skill is his driving accuracy, which makes him an appealing play on a positional course like Waialae CC that won’t discount a lack of distance and favors players who can keep it in the fairway. He followed that playbook for his best career finish at The Travelers last summer, ultimately losing to Harris English in a never-ending playoff, and we should expect some of the success at TPC River Highlands to translate here.

He capped off his 2021 year with a very impressive T4 finish at the Houston Open on a difficult track and strong field. It’s also encouraging to see he’s gained strokes putting on each of his last two starts on Bermuda greens. The course history is solid as well at the Sony Open, coming off of a T19 finish last year where he gained over six strokes T2G.

Hickok jumped out this week, ranking 15th in my Fantasy National model, a credit to ranking in the top 40 in almost all key stat categories, including Comp Course History, SG: T2G, SG: Short Game, Fairways Gained, GIRs Gained, P4 Scoring: 400-450. and Proximity 150-175. That profile sets him up to be a viable cut-maker, and a great DFS value at $6,600.