The National Football League is heading down the home stretch of its first 17-game season with Week 11 coming up. While there are always tons of options for bettors to choose from at online sportsbooks in many different states, there are other ways to make money while watching football, even if you aren’t looking at the NFL betting odds and placing moneyline or spread bets.

One of the most popular alternatives for those who want weekly action on NFL games is a season-long survivor pool. Below, we’ll get into what these pools are, plus we’ll offer up several games as ones to consider or avoid entirely when making your Week 11 NFL survivor picks.

While the Titans have lapsed a couple of times this season including a head-scratching loss at the Jets, Mike Vrabel’s squad seems to have locked in on both sides of the ball during their current 7-game win streak. Losing Derrick Henry to a fractured foot lit a fire under this team and they’ve responded with wins over the Rams and Saints, two of the best teams in the NFC. Now they face a Texans team that has dropped eight straight and averages the fewest PPG (14.2) on the season.

Houston ranks 31st in DVOA rush defense and coughs up the second-most rushing YPG (136.9) this season. Without Henry, the Titans are struggling to maintain efficiency on the ground, but they still have 3 rushing scores over their last two wins. It’s their defense that’s hit another gear, with DT Denico Autry keying a lights-out front seven that has allowed just 89.6 rushing YPG and forced 10 turnovers over their last five wins.

The Texans are committing the third-most turnovers per game (1.9) and allowing their QB to be sacked at the fourth-highest rate (8.02%) this season. Even getting Tyrod Taylor back from a hamstring injury didn’t do much to help this offense, as Taylor tossed three picks and was sacked five times in his return against the Dolphins. He should be under fire consistently in this road tilt against a Titans squad that ranks sixth in adjusted sack rate (7.1%) with 15 sacks over five home games this season.

Baker Mayfield suffered a knee injury to go along with his continued shoulder issues during Cleveland’s blowout loss in New England this past Sunday. Honestly, the way Mayfield was playing, the Browns offense won’t change much if Case Keenum takes the start against Detroit’s 30th-rated pass defense. The Browns offense will likely see a bigger boost with Nick Chubb (COVID) expected to return and if stud LT Jedrick Willis (ankle) is able to play after missing Sunday’s tilt.

When their line is relatively whole, Cleveland’s ground game has been unstoppable. The Browns average a league-high 5.3 YPC and the second-most rushing YPG (154.1) behind Baltimore. Detroit is coughing up the third-most rushing YPG (135.7) and allowing the highest TD conversion rate (77.8%) in the red zone this year.

The Lions played an extra 10 minutes in Pittsburgh and came away dejected with a tie. Now they’ll face an angry Browns team that rested a few starters and took a beatdown at Gillette Stadium but absolutely needs to turn it around at home to hang in the tight AFC North race.

The defending champs are highly unlikely to drop a third straight game, but the Bucs are still not a preferred pick in survivor on Monday night with the Giants coming off the bye. New York’s defense has improved incrementally this season and held both the Raiders and Chiefs to 2 TDs in a close loss and win before their break.

With Saquon Barkley, Kenny Golladay, Sterling Shepard, and other key offensive pieces potentially nearing a return from injury, Daniel Jones could have a lot of weapons with which to attack Tampa’s struggling secondary.

The Bucs are facing the highest pass-play rate (66%) in the NFL and rank 18th in traditional sack rate (5.15%) and 25th in adjusted sack rate (5.7%) per Football Outsiders. Richard Sherman (calf) was injured during warm-ups last Sunday and the Bucs are still without Sean Murphy-Bunting (elbow). Even backup CB Rashard Robinson (hamstring) was out against Washington and elite NT Vita Vea (knee) got hurt during the loss.

On offense, Tom Brady will hope that Antonio Brown (ankle), Rob Gronkowski (ribs), and Chris Godwin (hamstring) are all ready for this primetime tilt. The Giants have been a tough matchup for Brady throughout his storied career and he’ll need all his weapons to shred a team that ranks 11th in DVOA pass defense.

The GOAT should pull out a win, but if you’re still holding onto the Bucs, consider saving them for a Week 13 matchup at Atlanta with extra rest, or a Week 17 tilt at the lowly Jets. 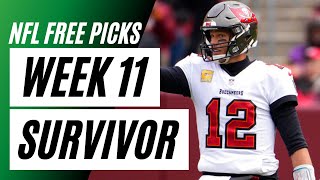